The U.S. Senate passed the House version of Paycheck Protection Program (PPP) legislation Wednesday, June 3rd, tripling the time allotted for small businesses and other PPP loan recipients to spend the funds and still qualify for forgiveness of the loans. The bill passed in a unanimous voice vote hours after Wisconsin Sen. Ron Johnson raised concerns that initially blocked the package.

Among the key provisions is a change in the threshold for the amount of PPP funds required to be spent on payroll costs to qualify for forgiveness to 60% of the loan amount.

The Senate approval sends the House bill to the White House for signature.

The vote had to be unanimous because the Senate is not officially in session. That meant that any senator could force the matter to be delayed until the Senate returned to Washington with enough members for a quorum and a vote.

Leaders from both parties in the Senate pushed to pass the legislation on Wednesday as the clock on the initial eight-week window recently expired for the first recipients of PPP loans. Johnson dropped his objections after Senate leader Mitch McConnell agreed to add a letter to the Congressional Record clarifying that June 30 remains the deadline for applying to receive a PPP loan. The bill moves the June 30 deadline for spending the PPP funds to Dec. 31 to accommodate the new 24-week window.

Following is a summary of the legislation’s main points compiled by the American Institute for Certified Public Accountants (thank you to AICPA for this update):

In anticipation of the pending PPP changes, the NASF yesterday hosted Tom Sullivan, Vice President for Small Business Programs at the U.S. Chamber of Commerce, to walk through what the emerging changes mean, how companies may be affected, and how to navigate the program. Over 80 NASF members registered for the session.

Tom brought relevant insights to NASF participants and answered a number of PPP questions, between appearing on Capitol Hill in the morning to address the need for changes and giving an interview to Yahoo Finance on the push for a PPP fix and the economic outlook for small business.

NASF has been working with its leaders across the nation through the pandemic to inform the process as lawmakers consider changes for small business:

“We’ll continue to be effective advocating for NASF members through our work with Tom, the US Chamber of Commerce and the Small Business Council. Thanks to all NASF members who have provided input to us so that we can get things done with lawmakers and provide value for the surface finishing industry,” said Christian Richter of The Policy Group from NASF headquarters in Washington.

A recording of yesterday’s NASF PPP webinar with Tom Sullivan can be found here. 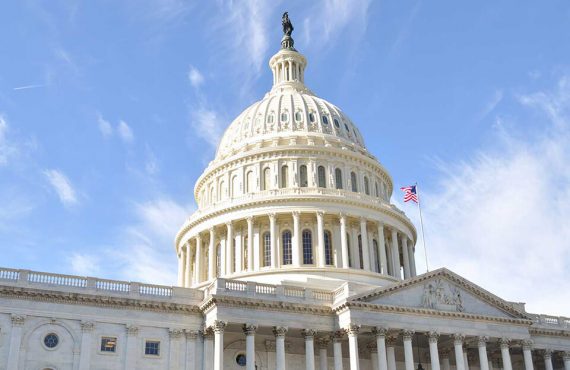 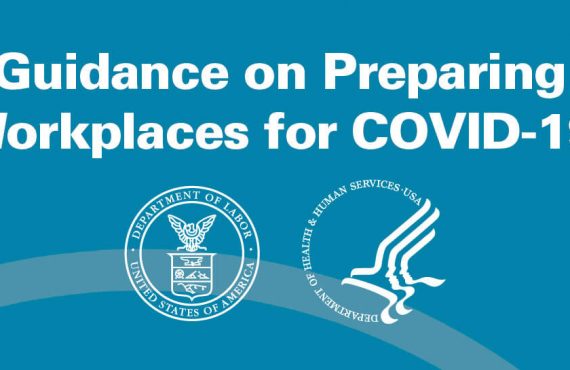 Coronavirus Disease 2019 (COVID-19) is a respiratory disease caused by the SARS-CoV-2 virus. It has spread from China to many... 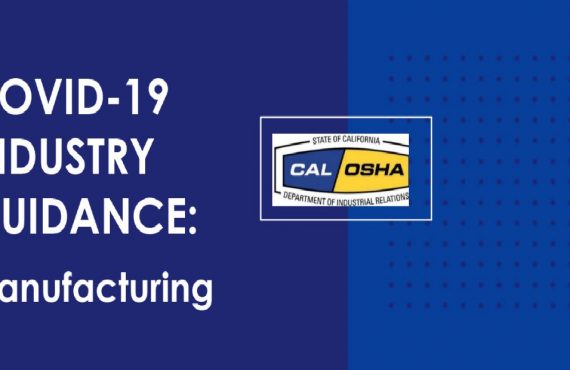 Overview On March 19, 2020, the State Public Health Officer and Director of the California Department of Public Health issued an order... 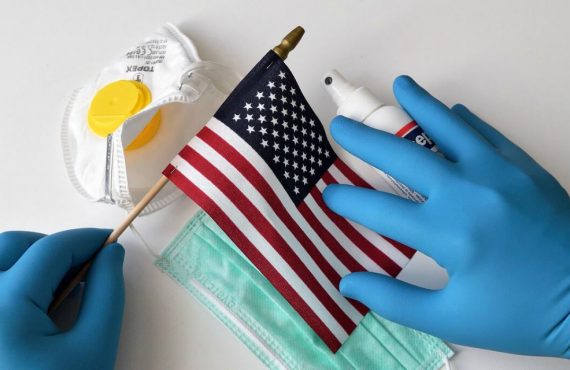 Now is the time to develop and implement plans to help keep public spaces clean (including businesses, homes and workplaces),... 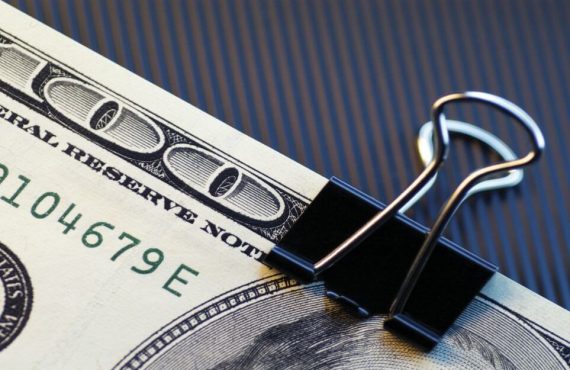 The Metal Finishing Association of CA recently came across small business grant information and wanted to share these opportunities with our... 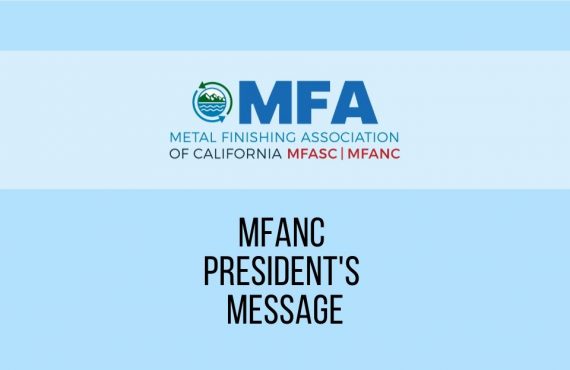 I hope that everyone is staying healthy and safe during this unusual time. I would like to thank our Executive... 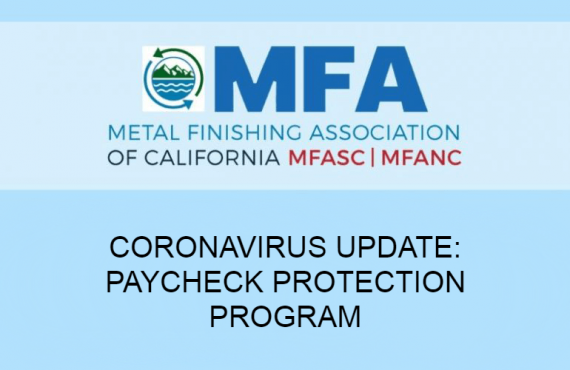 Since our recent NASF update and SBA Guide to the new Paycheck Protection Program, some member companies have had trouble... 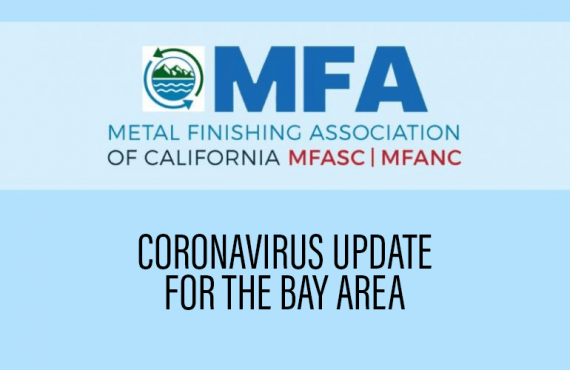 The current coronavirus stay-at-home order has been extended through May 3 with added restrictions by Bay Area health officials in... 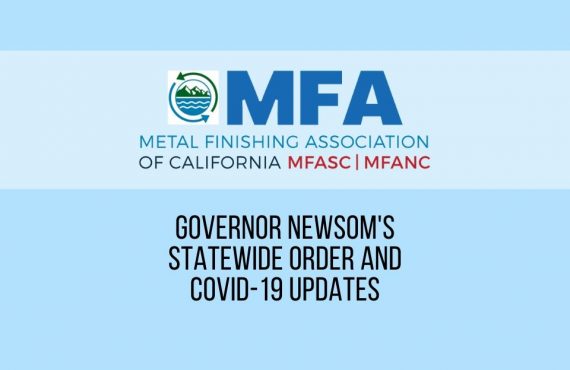 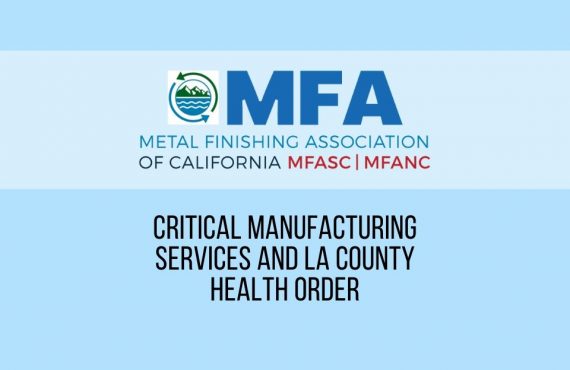 Please read more below for guidance on what critical manufacturing services are as classified by the U.S. Department of Homeland... 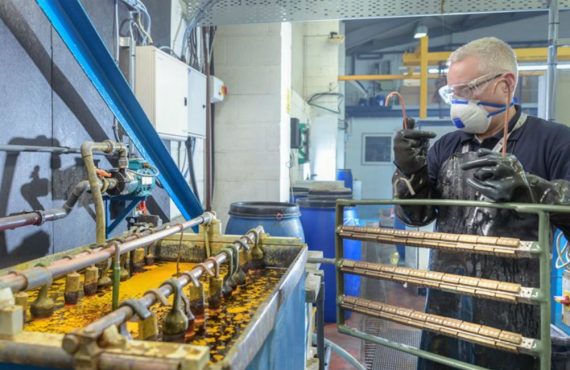 PFAS or Per- and poly-fluoroalkyl substances is a hot topic and is gaining interest not only in different industries but... 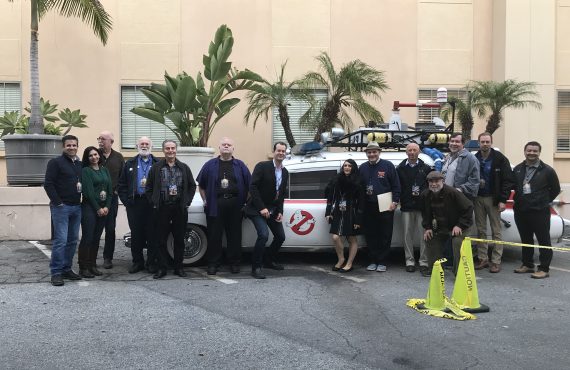 The MFASC Board of directors toured the Sony Studios lot on December 5th. It was a great day and a... 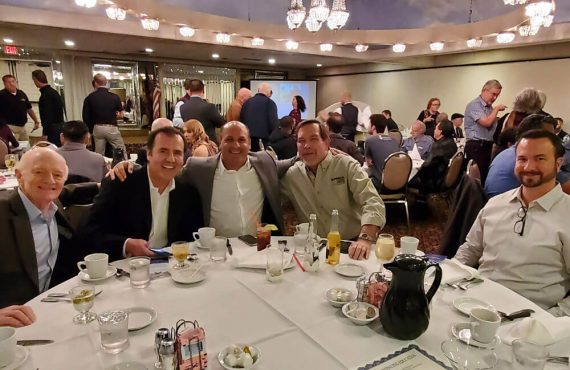 Thank you to everyone who made it to our California Legislative Update Annual Dinner Meetings for MFASC and MFANC on...